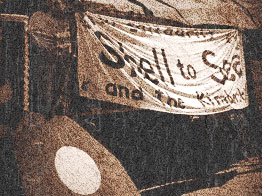 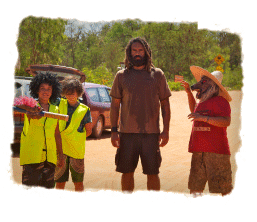 Jason Miles a Githabul man made a call to activate 10000 light warriors to make a stand on the 10th of October to protect the last frontier from the beast of Industrialization - at James Price Point or Waldaman - 60km north of Broome. And AMEND (stands for Ancient Mother Earth New Dreaming)

Jason inspired by the Sovereignty Workshop came up with an immediate action plan to get people over to the West the final frontier and stand with fellow Protectors of Country and our Sovereign brothers and sisters.

Many of us ventured across to the Kimberley to protest the illegal taking of land for the second largest gas precinct to be built in the world, rumored to be the largest.

Where greedy people are planning the largest industrial complex in Australia to put in the most pristine part of the continent - which will not only affect the land but also the ocean.

To continue this story The Bohemian Beat travel across to confront -

The beast descending furiously upon one of the least developed and most beautiful regions of Western Australia to begin exploiting natural resources valued to them at hundreds of billions of dollars.

From the communities stand point there is no transparency.

In the case of what is happening at the proposed site at James Price Point, 60 km north of Broome - What we see is how Globalisation, neoliberalism and the State-Corporate alliance has constructed and reconstructed Aboriginality around the The Kimberley’s LNG development proposal.

BUT is the globalization, liberalization framework collapsing? How does this all interplay ? What is all this interest in Australia?

--
On the 10th October a stand was made for Ancient Mother Earth New Dreaming... a spontaneous movement of people to stand with the protesters against mass industrialisation of their land - mass destruction of land... Where Economics today is Industrialisation.

The place under threat is Walmadan or James Price Point - 60km north of Broome. This area had already been protected in 1989 following a Management report that proved in court the cultural importance of the area, burial sites and songlines and the Lurrujari Heritage trail. But all of that seems to mean nothing.

The Browse Basin LNG Joint Venture Partners are pushing ahead with this development despite incomplete processes including - the strategic assessment and heritage listing assessment processes by the Federal Environment Minister.

The development of a gas hub on land expropriated in the culturally and environmentally sensitive Kimberley region is considered an investor risk as stated in a recent Investor Alert released by ACF(Australian Conservation Foundation).

The Premier of WA, Colin Barnett, announced in late September 2010 that land would be expropriated by compulsory acquisition from Traditional Aboriginal owners at JPP for the green field Browse LNG processing hub.

At the blockade a red dirt road at Black Tank on the corner of Cape Leveque and Manari Road, I joined fellow activists. On the morning of the 10th October the convey did not turn up. Instead police drove past a few times. The direction of energy from the big protest had changed to a cultural gathering that was being arranged by the Traditional Owners for the blue moon in a couple of days. So nobody wanted to deter that special event in any way.

When the convey arrived in the afternoon, the protesters blocked the road for about 5 minutes or so as they slowly crossed the road in a light hearted and peaceful manner. The convey was then let through.

A short time later, the police arrived and aggressively started targeting people and issuing them with move on notices.

When the police went for an elderly aboriginal women - things got out of hand - leading to two arrests of Byron residents who stepped in the way of the police to protect the old lady.

Riddhi, who just returned from participating in Amend (Ancient Mother Earth New Dreaming) where people from across Australia, particularly this eastern region, ventured across to the Kimberley to protest the illegal taking of land for the second largest gas precinct to be built in the world, rumored to be the largest. We had walked into a war zone - unexpected playing field - that brutally separated tourists from activists...

The audio of the show below has been split into 3 audio files for faster download. Just click the play button on any of the show parts below and enjoy.

The second part of this series covering events occurring in the Kimberley region of WA.

The audio of the show below has been split into 3 audio files for faster download. Just click the play button on any of the show parts below and enjoy.

Check out these websites for further information: