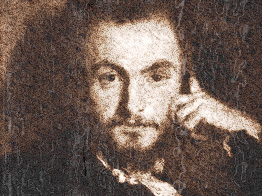 He is credited with coining the term "modernity" to designate the fleeting, ephemeral experience of life in an urban metropolis, and the responsibility art has to capture that experience.[

Baudelaire's notorious collection of poems, Les Fleurs du Mal (The Flowers of Evil, 1857), traces a spiritual journey from corrupt life to purified existence. Expressing
the changing nature of beauty in modern, industrializing Paris during the 19th century. The collection, especially the sonnet "Correspondences," inspired a group of French poets known as symbolists.

Often, to amuse themselves, the men of the crew
Catch those great birds of the seas, the albatrosses,
Lazy companions of the voyage, who follow
The ship that slips through bitter gulfs.

Hardly have they put them on the deck,
Than these kings of the skies, awkward and ashamed,
Piteously let their great white wings
Draggle like oars beside them.

This winged traveller, how weak he becomes and slack!
He who of late was so beautiful, how comical and ugly!
Someone teases his beak with a branding iron,
Another mimics, limping, the crippled flyer!

The Poet is like the prince of the clouds,
Haunting the tempest and laughing at the archer;
Exiled on earth amongst the shouting people,
His giant's wings hinder him from walking.

You, who like a dagger ploughed ?Into my heart with deadly thrill: ?You who, stronger than a crowd ?Of demons, mad, and dressed to kill,
Of my dejected soul have made?Your bed, your lodging, and domain:?To whom I'm linked (Unseemly jade!)?As is a convict to his chain,
Or as the gamester to his dice, ?Or as the drunkard to his dram, ?Or as the carrion to its lice — ?I curse you. Would my curse could damn!
I have besought the sudden blade ?To win for me my freedom back. ?Perfidious poison I have prayed ?To help my cowardice. Alack!
Both poison and the sword disdained?My cowardice, and seemed to say?"You are not fit to be unchained?From your damned servitude. Away,
You imbecile! since if from her empire ?We were to liberate the slave, ?You'd raise the carrion of your vampire, ?By your own kisses, from the grave."