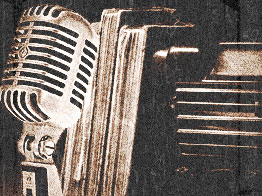 The Bohemian Beat is the prodigy of Riddhi.  The first show aired on Byron Bays Bay FM on the 02 of November 2006 and continues to play each week from 11am to 12 noon on Thursdays.  The Bohemian Beat  debuted on the Australian Wide Community Radio Network on the 02 December 2007, every Sunday between 10-11am and since October 2008 repeats Thursday 4-5pm.

The Bohemian Beat takes the listener on a journey through the minds and lives of some of the greatest men and women that have ever lived and weaves a tale through the creative inspiration that has manifested in the literature, music, visual arts, philosophy, science and sociology of the day.

By revealing the events that shaped such potent expression and following the artists creative vein, Riddhi discovers the truth, beauty and humanity behind these ageless words and how they have helped communicate and inspire new ideologies, new visions and new ways of living.

Poetry is essential as it goes straight for the heart and resonates with those private emotions we fear to reveal. It gives us courage and guidance by articulating inchoate emotions that lie below our consciousness.